Here is another letter from my sons Elf on the Shelf. This one came last year with just the letter and envelope with a big snowflake ornament. It was such a hit with him that we continued to send the letter again this year. We originally had to send him a letter because when he was in Kindergarten so many of his classmates were getting their elf on the shelf before Thanksgiving! Yikes. So with a little Christmas ingenuity mixed with some Christmas magic a story and tradition were born for our family. The elf on the shelf letter. This one talks about why some other children had already received their elfs on the shelf and why he hasn’t as of yet. Anthony loved the letter we put it on our kitchen fridge to display to everyone who visited our home during the holidays. He was so excited to receive it he even brought it into school to show his teacher and his fellow classmates. Take a look below and if you end up sending your child an elf on the shelf letter we would love to see it and share it with everyone. Just post it to our facebook page! 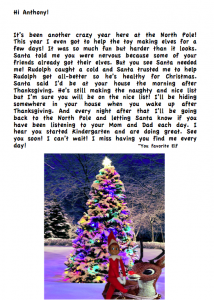 Elf on the shelf letter